The history of Siteglide - The CEO’s story 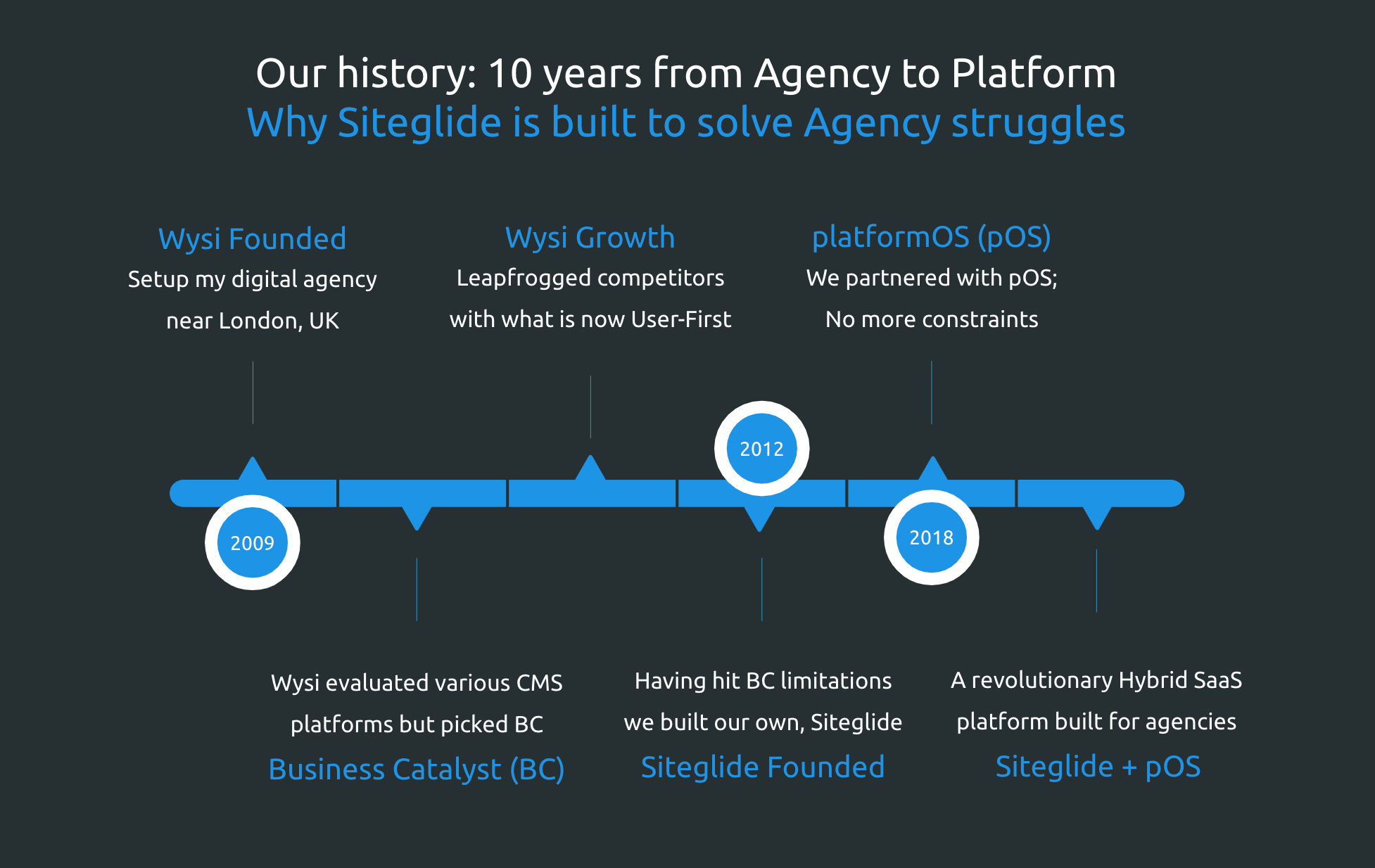 Over a decade ago I started a digital agency, Wysi. I wanted to use technology to our advantage and run an efficient agency that helped small businesses build far more than just websites. Wysi is now thriving and works on some incredible projects including a Marketplace and Community for possibly the fastest growing enterprise software company in history, UiPath. But it wasn’t easy getting there and I knew something like 90% of startups fail within the first few years.

Having achieved this my vision is to make it easy for digital agencies across the globe to succeed and thrive by having access to the right tools and support.

Technology plays a vital part in starting and growing an agency. I spent almost a year researching all the options for building and managing websites. Back in 2009 I trialled countless platforms and nowadays there are 10 times more to pick from! I tried to be pragmatic and consider all the factors (the engineer in me!) but I hadn’t run an agency before, I was fresh out of university. I built sites on Joomla, Wordpress, MODX and many others. They all had a learning curve, quirks and limitations. I then stumbled across Business Catalyst (BC). It immediately stood out as more than just a box of features. Its tagline was ‘Online Businesses Not Websites’, it talked about benefits not features. It focused on the agency being able to build, manage and earn. I immediately knew it was what I had been looking for: the ‘edge’ that could help our agency stand out and leapfrog the various other agencies in our area. I remember it gave me the buzz and drive to get started and build more than just another digital agency.

We arranged a call with the Business Catalyst sales team and spoke with Colin Frost on a Friday at the end of August 2009. I remember it well and it was the catalyst (sorry, had to get that in there!) for an incredible 10+ years that have seen Wysi grow and led to the birth and success of Siteglide. Colin showed us more than just tools, he showed us how we could quickly grow our agency and focus on delivering solutions rather than wrestling with technology. He said there was an exciting announcement coming the following Monday that he was dying to tell us but could not...that announcement turned out to be the acquisition of Business Catalyst by Adobe. We became partners that Friday and paid the joining fee - the biggest expense/investment we had made until that point. We firmly believed that investment would be vital to our success and it’s still one of the best decisions we’ve ever made...read on to see what trumps this!

Limitations and overcoming them

Wysi focused on winning the right kind of projects and increasing the value of our offering by getting the most from Adobe BC. We became specialists in Portals, Membership sites and building solutions that helped automate client processes and manage their customers. This was the ‘secret sauce’ that BC had which made it stand out from any other platform (in our experience) and allowed you to offer enterprise grade solutions to smaller businesses. Not only did we know this was our niche but we were passionate about it and when we did hit limitations with BC we found ourselves building enhancements on top.

In 2012 we had built such a custom, repeatable solution on top of Business Catalyst we set up Siteglide as a separate company to offer it as a standalone product from BC. Siteglide used BC as the architecture which provided exceptional reliability, security and flexibility but what made it different to BC were the key components we added on top that are required for real world client projects. We built our own websites onto Siteglide but didn’t push into the agency space. We invested heavily in 2017 to build a complete agency focused product on top of BC and were about to launch it when in March 2018 Adobe announced they would End of Life Business Catalyst…

The next 7 days were incredible looking back. There was obviously panic; both companies were 100% committed to BC and we couldn’t see life beyond it - we were blinkered. Despite that we did something amazing as a team. We did what I did back in 2009 and researched the options out there but this time we could dismiss 90% in an instant. We had 2 problems to solve: 1) Wysi needed an immediate solution - we needed a platform to build client projects onto for revenue. 2) Siteglide needed a future - how could we replace the architecture layer that BC provided?

To solve Wysi’s needs we set up trials in Duda, Webflow and probably others! We loved the ease of Duda but hit limitations almost immediately; it’s great for static/simple sites but could not handle portals or 80% of what BC/Siteglide offered. Webflow was far more comprehensive and from a designer’s perspective was revolutionary but yet again we hit limitations very quickly. Wysi had decided not to build another site on BC, it was a dying platform after-all, so we did start building sites on Webflow and for simple sites this worked well. Just to note, we are not criticising other platforms, each have a purpose and a good following, we just identified factors that meant they were not right for us.

Siteglide needed a lot more thought and planning. At this point I took a backseat from running Wysi to focus 100% on Siteglide. BC used Amazon Web Services (AWS) as the core infrastructure so we looked at going directly to them. At that point I went to Adam Broadway, Co-Founder of Business Catalyst. I knew he had a new venture focused around marketplaces but had no idea that would start what has become an incredible partnership and made Adobe’s decision a blessing in disguise. Adam had left the Adobe team in 2013 as he wasn’t happy with the direction they were taking Business Catalyst in. He started platformOS taking the best concepts and learnings from BC and quickly made a name in the Marketplaces space by having the likes of Intel and Hallmark using the platform.

The right infrastructure and architecture

One call with Adam and we knew we had found exactly what we needed. It reminded me of the call with Colin some 9 years prior (Colin is still on Adam's team today!) but this time we had the experience to know exactly what we needed and the proof that Adam built revolutionary products. We quickly got our hands on the product and found the ‘closed box’ SaaS approach we were used to with BC, Webflow, Duda was nowhere to be seen. We had direct access to everything and could build anything we wanted. We quickly did a proof of concept for Siteglide and then committed everything we had to rebuilding a new and improved version of Siteglide on platformOS. This is by far the best decision we have ever made.

A great example of the power of flexibility is the work Wysi has done with UiPath. They were looking for a marketplace solution to replace the off-the-shelf enterprise product they were getting frustrated with. Wysi scoped out an MVP for a Marketplace and 3 months later after a hugely successful launch in Miami, UiPath commissioned another project with Wysi for their Community. Since starting work with UiPath in April 2018, they have gone from a $1bn valuation to $3bn 6 months later and then $7bn 6 months after that. They are growing faster than Slack and are thought to be the fastest growing enterprise software company in history. Their Community and Marketplace built by Wysi on platformOS has helped them grow and engage with the worldwide user base helping them continue to win awards for service and customer satisfaction. Wysi could not have done this on Business Catalyst and it is a great example of what is is possible using Siteglide and platformOS.

In the meantime Siteglide focused on replacing the key Business Catalyst functionality so that BC partners who are stuck not knowing what to do with their clients’ sites can confidently move to a similar but improved platform. Siteglide became an Adobe approved migration solution in May 2019 and has agencies around the world building sites and migrating BC sites onto Siteglide. We’re extremely excited about the future knowing we have the best infrastructure available and could not ask for a better partner to work with than platformOS. The way Siteglide and platformOS work together is quite unique and gives agencies the best of both worlds when typically you'd have to pick Open Source or SaaS as your only options. We call it Hybrid SaaS where you have all the benefits of a managed SaaS platform but Open Source-like benefits such as total control and access to code and data. This opens up so much potential to build bespoke solutions and products for clients but without having to compromise Security, Reliability, Speed, Compliance or Scalability.

Our User-First approach helps agencies stand out by combining our 6 pillars: Design, Communication, Architecture, Interaction, Personalisation and Automation. We’re confident this gives you the ‘edge’ to leapfrog your competitors that I was looking for back in 2009 and we’re here to support agencies and help them thrive. Transform your agency by removing brick walls and limitations to allow you to offer far more than just websites. Siteglide puts a CRM at the core which gives you the data and flexibility to build Portals, eCommerce sites, bespoke applications and much more.

You can find out more about Siteglide on our website and it’s completely free to sign up if you’re an agency/web developer.

Ready to get started?